Why Philippians 4:13 Doesn’t Mean What You Think

Sign up for all the latest articles, resources, and tools to help you grow as a leader on your team and in life.

Our capacity for survival and achievement is truly staggering!

We’ve all heard jaw-dropping tales of people enduring unthinkable conditions—some as a result of tragedy and others out of a desire to push the physical and mental boundaries of human ability.

Perhaps more than any other people group, competitive athletes are notorious for chasing the elusive PR with dogged determination—just a little faster, a little higher, a little further beyond known limits.

In the quest for progress, Christian athletes inevitably look to the Giver of all good things (James 1:17) for enablement in the areas of strength, endurance, wisdom, etc. Where better to look for these things than to the One who made us!

That calls to mind a passage often quoted by athletes, but frequently misunderstood: “I can do all things through him who strengthens me” (Philippians 4:13, ESV).

If this is a favorite of yours, hang with me—its meaning is actually better than most athletes realize.

Paul’s words are handled almost superstitiously—a spiritual rabbit’s foot—inscribed on skin or apparel with hopes of Divine favor. With the best of intentions, this phrase is rehearsed as an assurance of God’s enablement for personal pursuits.

It is fuel for a motivational mindset bent on overcoming an obstacle, whether the hurdle be a competitor or a record yet to be broken. It’s positive self-talk that is common—even essential—when flirting at the edges of known ability. But is that what the Apostle Paul intended?

As inspiring as these words might sound by themselves, they get distorted when applied apart from their actual context.

Like any portion of the Bible, the meaning of a passage is determined by the author (not the reader) and limited by what comes before and/or after it. If we want to get at the intended meaning of a message, context is king.

So what does Paul mean?

If we include verses eleven and twelve with thirteen, we get a clearer idea of Paul’s intent. “…I have learned in whatever situation I am to be content. I know how to be brought low, and I know how to abound. In any and every circumstance, I have learned the secret of facing plenty and hunger, abundance and need. I can do all things through him who strengthens me.” (Philippians 4:11–13, ESV)

Paul’s aim here is contentment, not achievement. Rather than envisioning all that he can accomplish, he is focused on his heart response to his circumstances, whether favorable or not.

With that in mind, here are a few things to consider:

Had Paul applied this to athletes, he might have said, “After training my guts out and giving my all on game day, I can live with the results. Regardless of what’s at stake, I can play by the rules. Win or lose, I can genuinely treat coaches, officials and fellow competitors with love and respect. I can express gratitude regardless of the outcome—all because of the strength I possess as a follower of Christ.”

"Paul didn’t always see things the way he describes in this passage. In his words, he had to learn to be content in the ups and downs of life."

Paul didn’t always see things the way he describes in this passage. In his words, he had to learn to be content in the ups and downs of life.

I take that to mean he didn’t always respond well, but responded better over time by embracing a “secret.” He learned a timeless truth that served to anchor his wandering heart as the winds of his circumstances swirled around, a change within himself he explains in verse thirteen.

Paul grew to believe with great conviction that all of who Christ was in his life—his Savior, his Friend, his Provider, his Lord—was the essence of what he needed most. The sufficiency of Christ that Paul experienced enabled him to have a strong heart of contentment (joy, peace, and gratitude) in the best and worst of times.

Contentment here isn’t promoting apathy or mediocrity. This in no way commends half-heartedness in our daily endeavors. If we are to do all that we do to the glory of God (1 Corinthians 10:31), then it would seem that we should exert ourselves fully.

And after we’ve left it all on the field, Christ enables us to be content with the outcome, win or lose.

Paul could have said it this way: “I have learned over the years that I can do all things—I can be brought low, I can abound, I can face plenty and hunger, abundance and need—with enduring contentment because of the strength I receive from the sufficiency of Christ.”

Christ-followers who grasp what Paul is saying here ought to be the most passionate people on Earth!

We need never lack motivation regardless of how daunting our task may be. Our motivation, however, isn’t rooted in the prize of personal achievement, but in the abundance of what Christ has already achieved on our behalf.

If anything, Paul’s words in Philippians chapter four release us to give our all, knowing that our all is enough to glorify the One who is most definitely enough for us.

Read other essays from Monty Waldron on sport/faith at tri4him.com/blog/

"I can do all things through him who strengthens me." 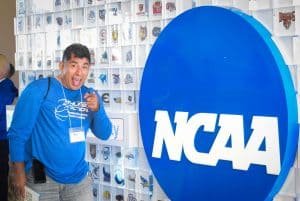 Highlights Coaches get all the latest Sign-up to get ministry updates from our global ministry into your inbox. An issue has occurred. Please try again 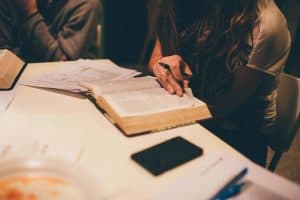 7 Spiritual Disciplines To Practice During A Pandemic

What Does it Mean to Play for an “Audience of One”?