get all the latest

Sign-up to get ministry updates from our global ministry into your inbox.

Roderick Winters arrived at Mizzou in 2014 eager to begin his collegiate football career, spurred on by dreams of eventually playing professionally. Things seemed to be falling into place until three shoulder surgeries kept Roderick from even stepping foot onto the field until his senior year.

“I was like, ‘Okay, God, clearly I didn’t come here to play football, so what is it?’” Roderick recalls. “I think I came to school to grow deeper in my faith with Him.”

The spring semester of his senior year, after much prayer and reflection, he felt a sense that he hadn’t been following God closely. But, Roderick was grateful as he saw how God had remained gracious in spite of this, and decided he would pursue whatever God had ahead for him.

That same semester, Roderick got connected with Athletes in Action at Mizzou, and he was eventually asked to consider returning as an intern with AIA when he was done playing. Although he was interested in the opportunity to be involved in ministry, the idea of raising financial support was a major obstacle.

“My biggest thing was, ‘I don’t know how I’m going to raise support!’ I come from a background where most people involved in church are bivocational so they’re working and doing ministry, it’s not full-time,” Roderick says. “Many times people of color don’t come from families with financial stability or wealth where they can just do that, or even recommend you taking that route.”

Despite his concerns, Roderick was committed to following God’s leading.

“I was like, ‘God if you want me to do this, You’ll make a way,’” he remembers. “Sure enough, I get to AIA and it just so happens to be the second year of this thing called Jumpstart.”

Jumpstart, now in its fourth year, is an initiative to bring more young men and women of color onto the staff of AIA so that more athletes see themselves represented throughout our ministry. Rather than leaving interns like Roderick on their own to secure the funding for their internships, AIA asks Jumpstart interns and their local ministry team to raise two-thirds of their support locally, while the national team of AIA ministry partners provides that final third for one year.

“Our organization faces significant lack without the influence of Roderick and other people of color,” says Nathan Buxman, the staff member who invited him to consider interning.

“In my experience, Roderick is actually helping us ‘jump start’ our ministry by adding his valuable perspective and experiences. We absolutely would be weaker without him.” Nathan adds, “His presence gives so many others an opportunity to come and participate.”

Roderick says Jumpstart was a great way to get started in full-time ministry, as it has opened the door for him and other athletes of color to be a part of AIA in a way that had previously seemed impossible.

“I love talking with student athletes,” he says, “I love talking about the gospel and being in community with people. Jumpstart makes that possible.”

Bringing on more ethnic interns like Roderick is crucial to effective outreach and achieving unity and oneness across campuses and our ministry teams. Their voices and personal experiences make our team infinitely stronger. And without their influence, our ability to minister would be hamstrung.

There are three Jumpstart athletes starting with AIA this fall, but we dream of a day when dozens of interns of color are leading in ministry across the country.

“[Jumpstart] has opened my eyes to various possibilities of what ministry entails. Ministry isn’t just four walls. Coming from a background like me, most people hear “ministry” and they think pastor, they think behind a pulpit, they think you have to stay within the four walls of a church. But much like Jesus….He was out in the fields evangelizing and/or preaching and teaching in that fashion.”

We’re thankful for Roderick. His unwavering trust to follow God is a perfect example of having blind faith, taking that next “yes” step even when you don’t know how the road ends. God is using him in huge ways, making a difference in the lives of the influential leaders he leads at the University of Mizzou.

Since 1966, Athletes in Action has had one mission: to reach athletes with the gospel of Christ, and train them in their faith. We have many stories of athletes using their platform to share the gospel. Would you like more uplifting stories like this sent directly to your inbox?

By SIGNING UP to receive Team Up stories, you won’t miss out on how God is working — on college campuses, in professional locker rooms & across the globe!

Are you ready for 2-3 gospel-filled sports stories a month?

get all the latest

Sign-up to get ministry updates from our global ministry into your inbox.

Highlights of how athletes and coaches around the world are finding their identity and purpose in Christ. 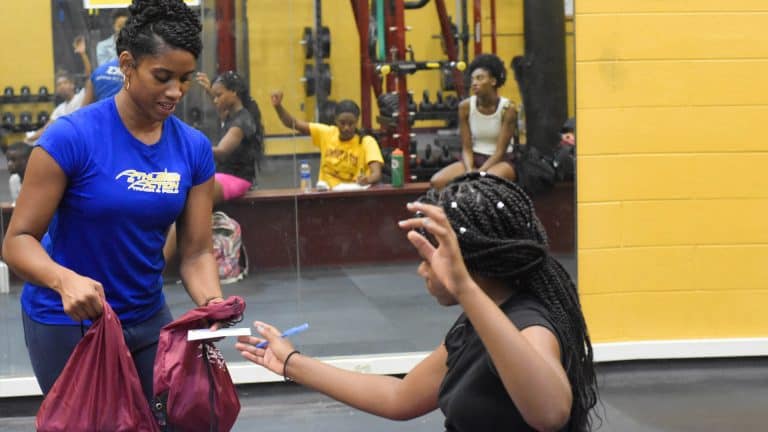 Over 900 Athletes Experience UTC Every